The Bike is my 3D printed 'give away' piece which derives from a Thingiverse design by CyberCyclist published on 8th March 2015. My make of this 'thing' can be seen HERE. I have modified the  design published on Thingiverse to make some of the pieces a little bit more substantial than the original when printed on my Mendel90 3D printer although, the majority of the work has been done by CyberCyclist.

Once individual components have been cut away from the supporting gate, they can be slotted together to form a model of a touring bike complete with rear mounted panniers. As all of the pieces are the same height, 1mm, when printed and as the print is simply an extrusion of a flat, two dimensional design, it is not a particularly good example of what 3D printers are capable of - this design could just as easily have been laser cut rather than 3D printed. However, it is small, cheap, fun to assemble and has the potential to give the model builder some smug satisfaction once the build has been completed. :-)

As a picture is worth a thousand words .....

The Bike as presented 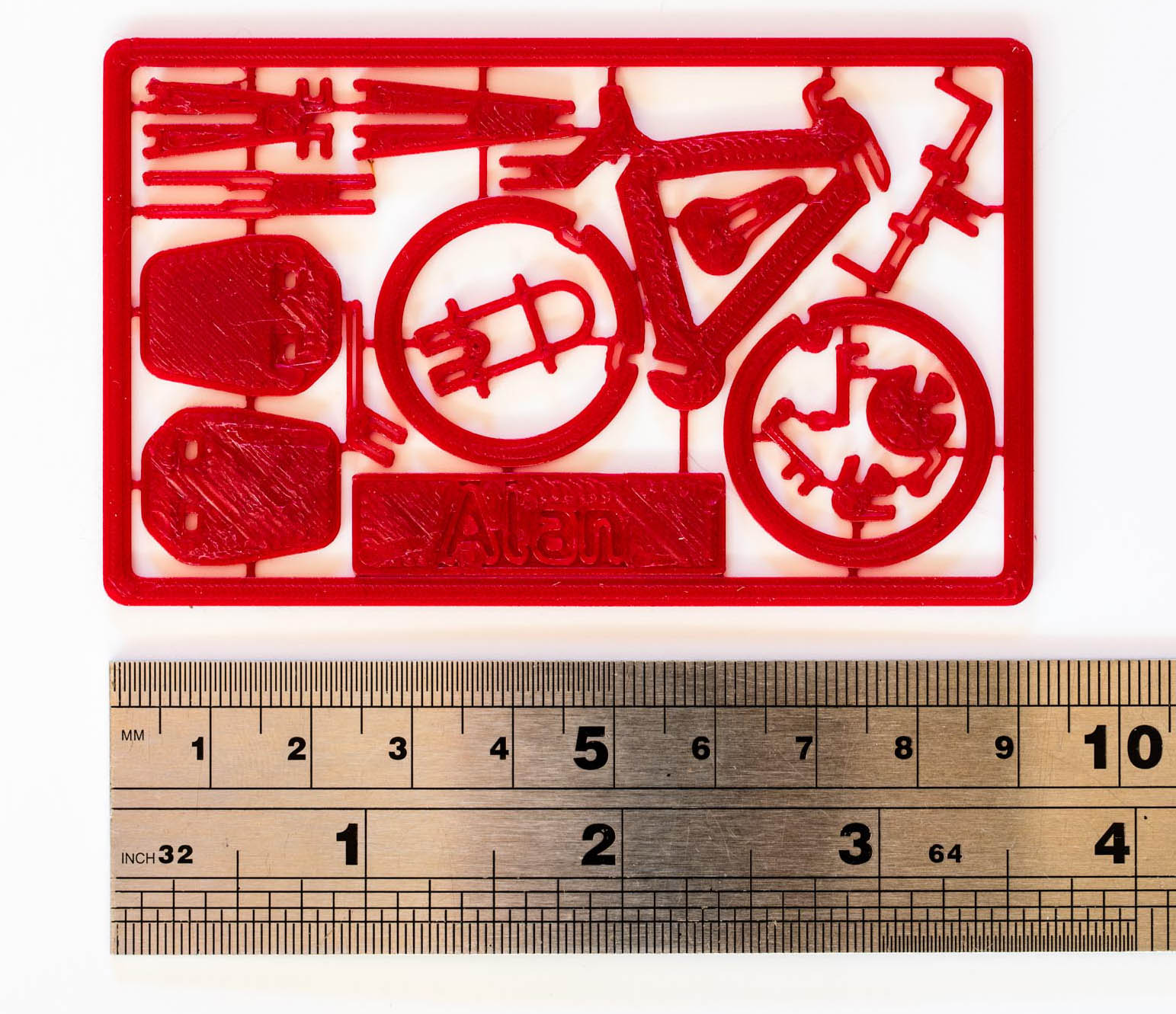 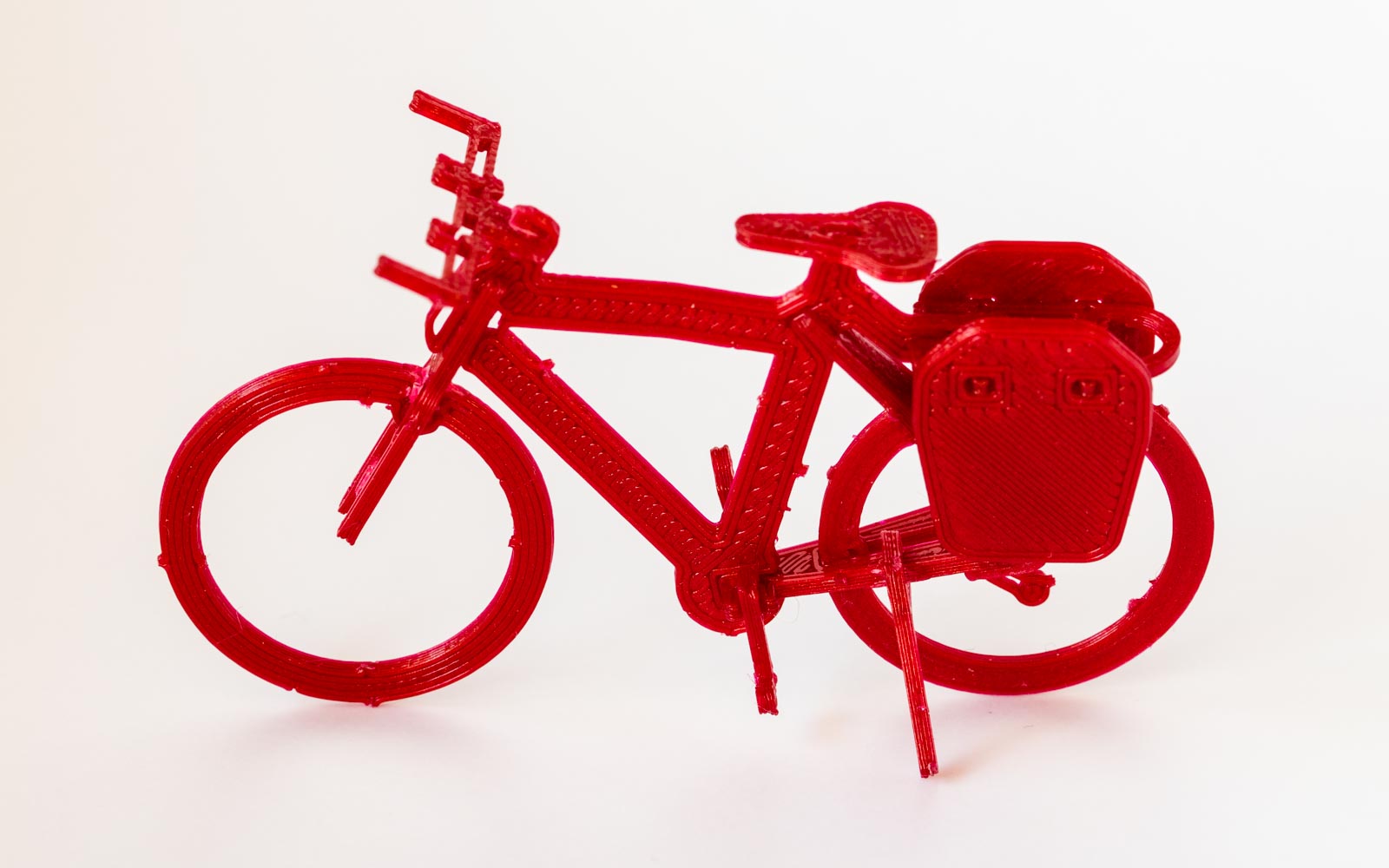 Pictures of a few bikes in three different sizes against a photograph, taken in late January 2016, of the Freddie Mercury statue in Montreux, Switzerland. The yellow and white bikes are the same size as the one above, the transluscent blue one has been scaled to 1.2X the size of the original and the gold one 1.6X. 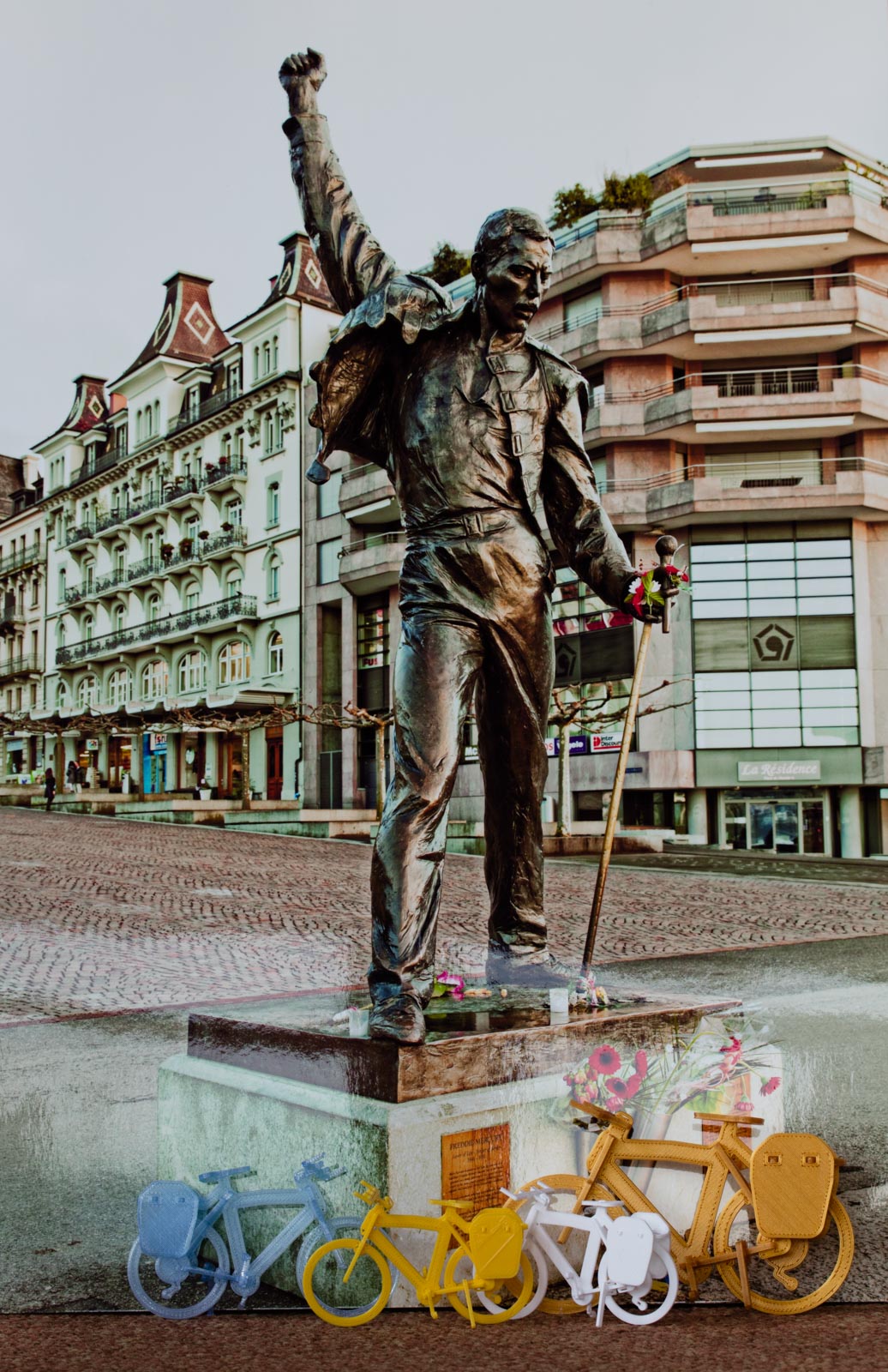 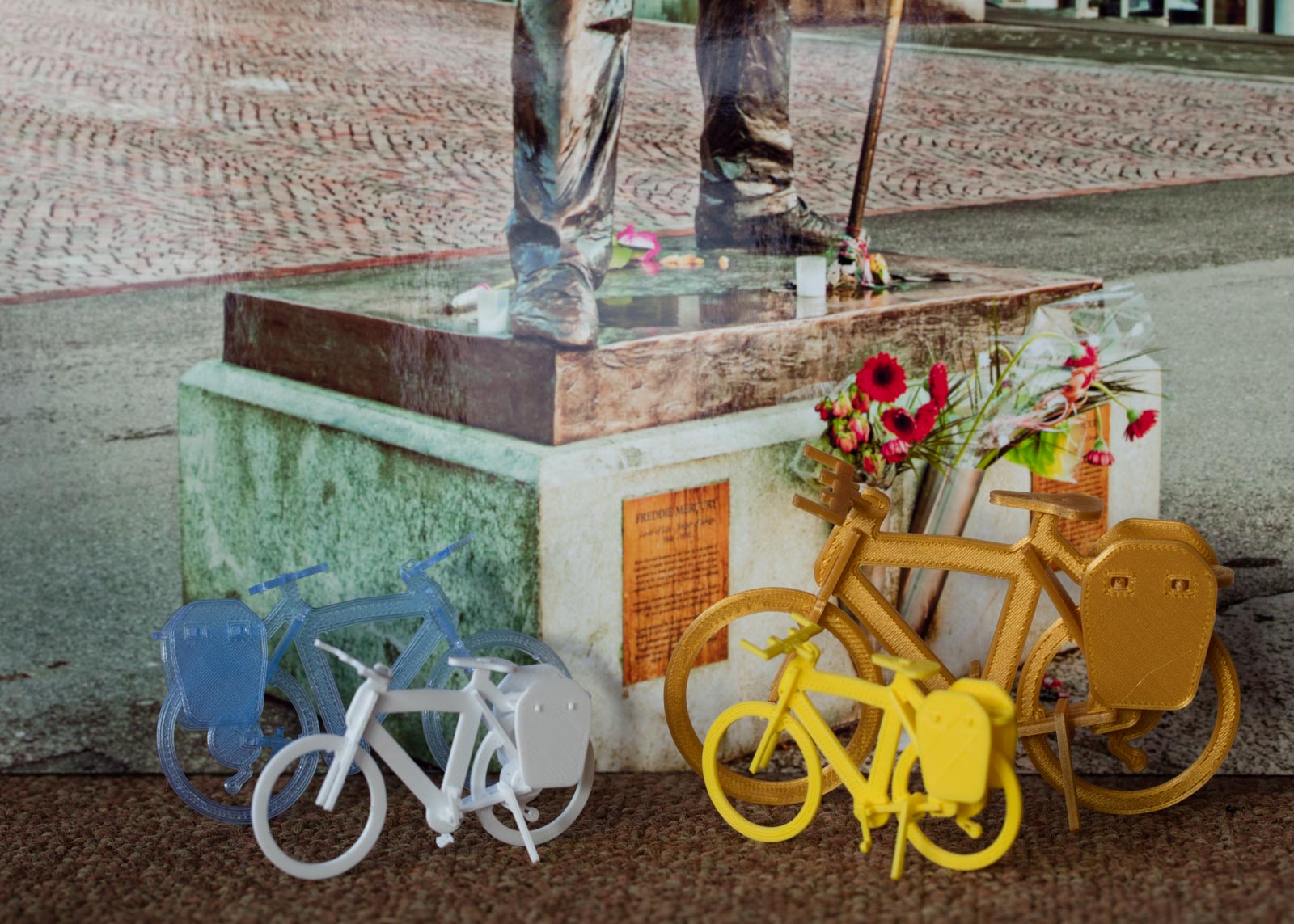 Finally, a few give away bikes in different colours. 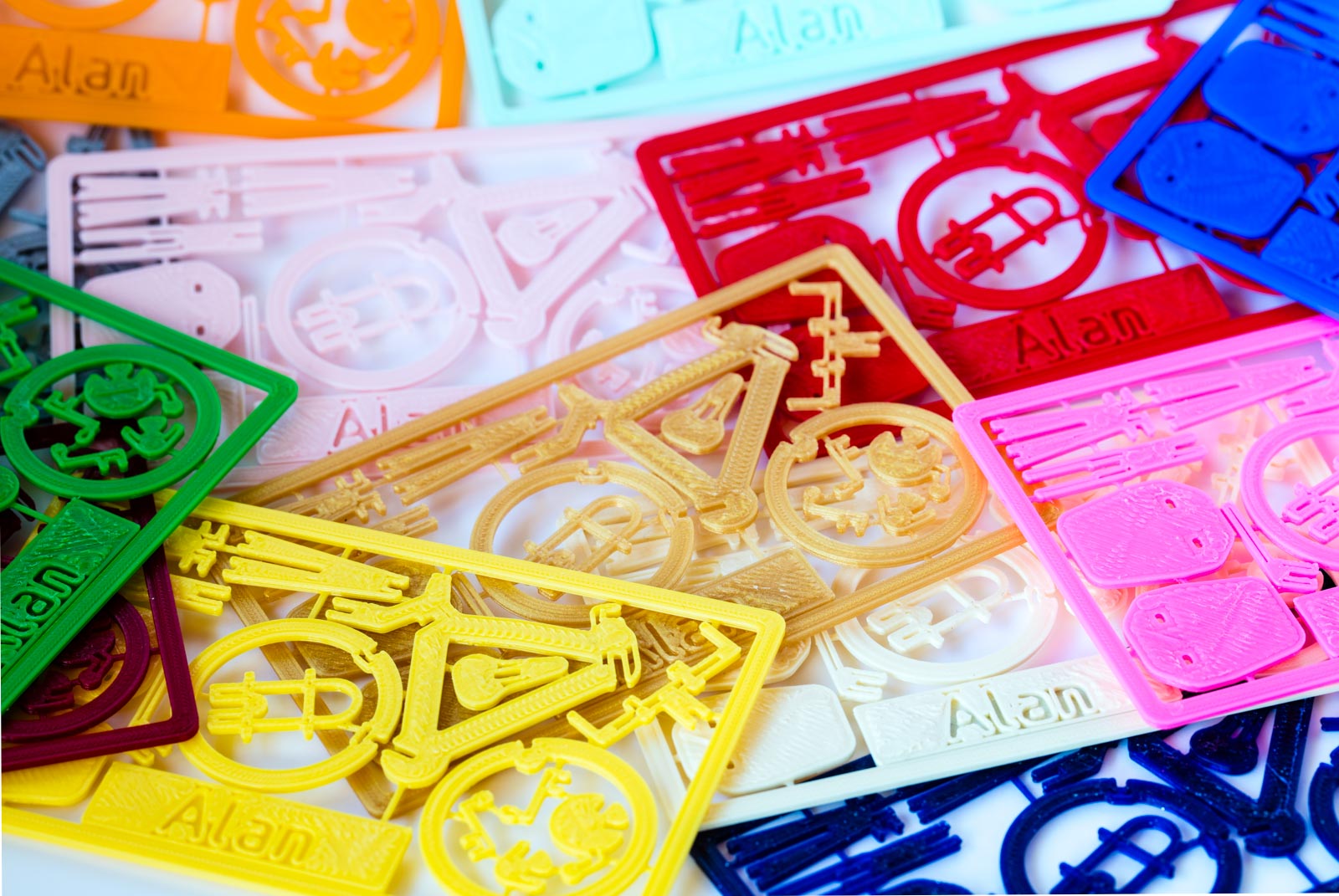 At this stage, commercial folk would be talking of small pieces, choking hazards, small children and stuff - take care.

Please note that if you decide to use superglue to keep parts in place, take care not to stick your fingers together. Saying that, the design is quite stable without glue but parts may fall off if not firmly pushed together. 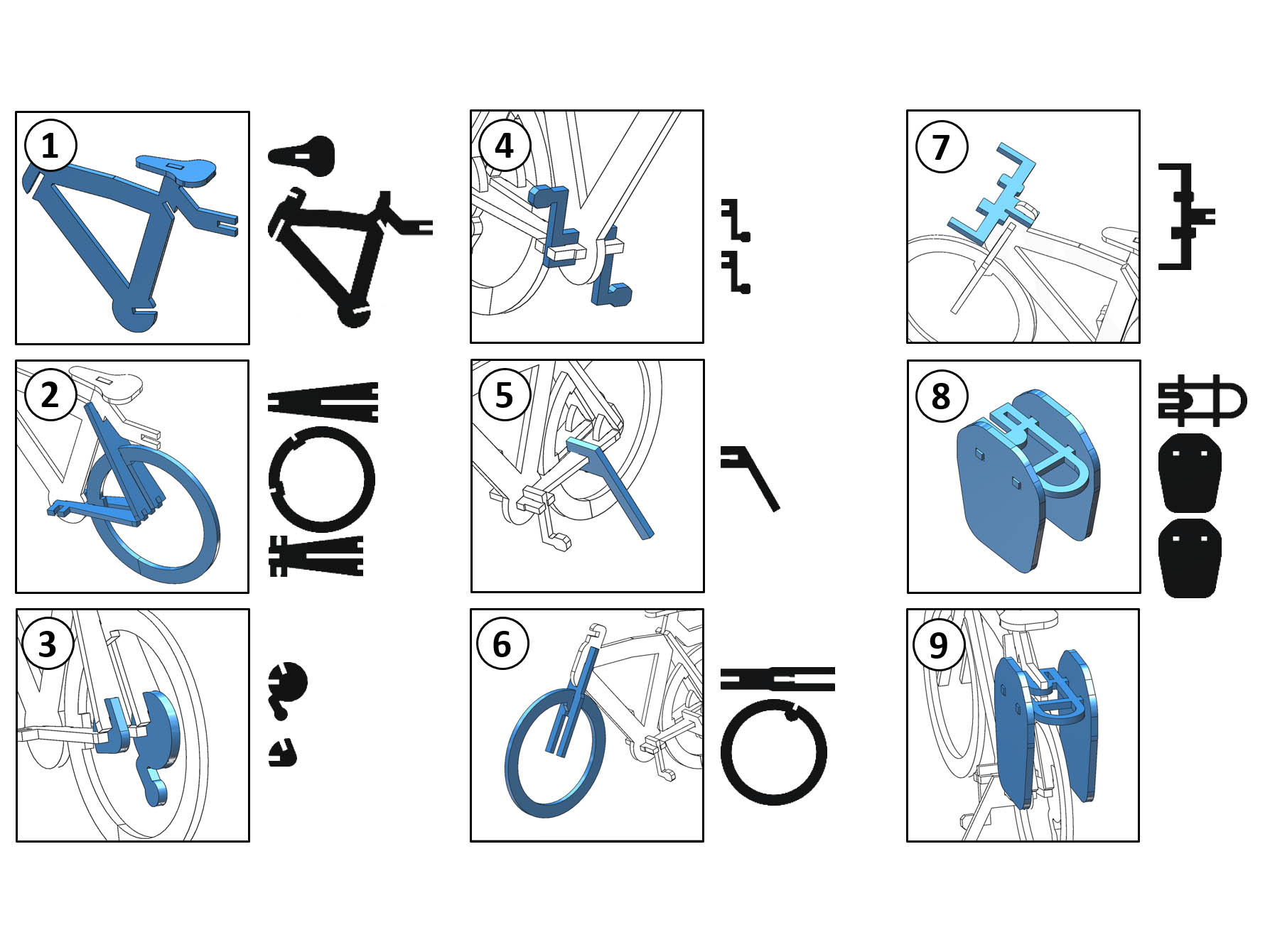 When your bike is finished and standing up and you are sitting down with a proud look on your face, take a selfie along with your bike and then Tweet and/or

perhaps. (I'd love to see it too - send me an EMail or picture message).

The plastic used was PLA - a thermoplastic material derived from corn starch. This is not a petroleum product which makes it a nice, environmentally friendly plastic. The printer used was my Mendel90 which I constructed in 2012, mainly from parts supplied by its designer, who is known to the 3D printing community as 'Nophead'. (Actually a pal of mine called Chris). The printer has a 0.4mm nozzle and takes 3mm diameter filament as its source material. The printer design is open source - not a patent in sight! Detail, as well as a photograph of my printer can be viewed on Nophead's blog HERE.

Print temperature was at 185C at a layer height of 0.25mm. (As the plate is 1mm thick, 4 layers were printed). I modified the original bike design, from the STL files supplied by CyberCyclist, using Spaceclaim CAD software. The modified design was exported in an STL format and then sliced using Skeinforge, to prepare it for printing. Skeinforge is open source software which I use for almost all of my 3D printing projects.

I have been printing in 3D since late 2011 - not photographs but computer designed objects - things!

Click HERE to take a look at my Print3D website - no longer selling 3D printed objects as an online shop but I'm always happy to consider requests for commissions - unusual gifts, special event one offs,  'must haves' as seen on Thingiverse or even to assist with that 'I've got an idea' scenario - turn your design on paper into a real physical object.